John P. Mucklestone served in World War II as a company commander in the eleventh airborne division at the young age of 21 and returned to begin practicing law in 1952. He taught me the basics of practicing law before I graduated from law school. He told me that the law was his "jealous mistress" and that you believe in your own abilities but you never "rest on your laurels". Perseverance, determination and good old fashioned hard work are what get the best results for your clients. He was never afraid of hard work. He loved a trial and preparing for litigation. "Brick by brick" you build your case until your opposition has nowhere left to go. One time he agreed to help out a fellow lawyer who was defending a client who had been sued by Chevron in the Federal District Court. The attorney had failed to do any discovery for his client and the discovery deadline had passed. He came to Dad asking for help a mere two weeks before trial. Chevron was represented by a large, competent and well-prepared law firm. Dad put his heart and soul into the case. Armed with only what his aging client could provide to him for a defense, he tried the case for a week and ultimately won. A verdict which was sustained on appeal.

Mom was involved in a major automobile accident on December 5, 1986. After surviving multiple injuries including a severe brain injury and a nine month coma she came home. Dad remained her devoted husband. Despite loss of basic functions, weight gain, short and long term memory loss and being confined to a wheelchair and walker. He escorted her with all of the family to social functions including the celebration of being a member of the WSBA for over 50 years for Mom and later Dad. He made sure her hair and nails were done every week. And every night he would walk through the front door, put his briefcase down, and walk over to her and say "how is my beautiful wife?" then bend down and give her a kiss. Dad died on December 2, 2003 and Mom died on January 24, 2008 3 days after returning from a family trip to Hawaii. Mom and Dad are deeply missed.. 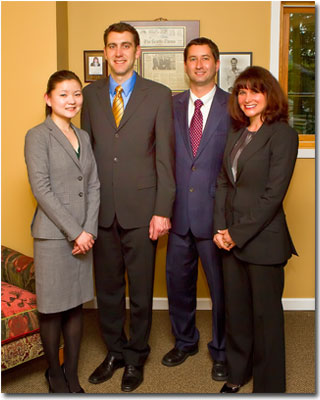 Mom and Dad taught us that you treat everyone with respect. The entire staff of the Courthouse, not just the judge. The janitor and the doorman of the office building, not just the person who signs the lease. They taught us that you return all phone calls the same day if possible. And at the end of the day, the job you have done at the best of your ability becomes the legacy you leave.

Three of the four children in our family became attorneys (Jan, our sister, is an accomplished artist living in San Francisco, James has his own practice in Arlington, John Patrick Mucklestone has his practice in Woodinville.) We are all carrying forward with the dedication, integrity, and commitment to client service that both John and Pat were known for in the Seattle community.

Today, Jeannie, Dave, Andy and Ji along with Amanda enjoy working in Medina.

We are dedicated to serving our clients.


"Bearing witness to your work ethic is a pleasure not commonly found these days." -- Client